After a very long break from marathon running (I’ve run 4 full marathons and 3 half marathons, but none in the last 5 years!), I decided that it was about time to get back on the horse (or, trails?) this year, and I wanted to make a big splash with a landmark event. I decided to do one of my bucket list races – the Napa to Sonoma Destination Races Half Marathon. And since Brant, my partner in crime, has cheered me on for several marathon races and talked about maybe doing one himself someday, I thought this was the perfect time. The day the race went on sale (it can sell out in minutes!), I emailed him to see if he wanted to join me and he quickly responded with “Let’s do it.” So, we registered as a “team” since you only need 2 people, and thought we might find a friend or two that wanted to join us. Within a couple days and a few mentions, we had 3 more friends agree to join us for this half marathon/vacation trip to California!

I put a training program together and after a lot of early bedtime Friday nights, 2+ hour Saturday morning long runs, lots of post-training run brunches, fancy new tennis shoes, lots of blisters and LOTs of water drinking, we were at the start line on July 16, 2017.

The hills and v 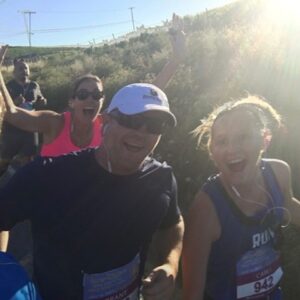 alleys of Napa were in front of us. Five friends registered and all made it to the start line. Two of us had run half marathons before, but for the other three (including Brant), this was their first race of this distance!

The race kicked off and we were on our way down the roads that led from Napa across the Sonoma County line and ended right in downtown Sonoma. One by one, we crossed the finish line, until all five of us had finished (and within 20 minutes of each other). At first, we couldn’t figure out what the odd hooks were on our finisher’s medals…until someone pointed us to the wine glass pick up table and we realized it was to hold your wine glass for the race end wine tasting – how cool?! 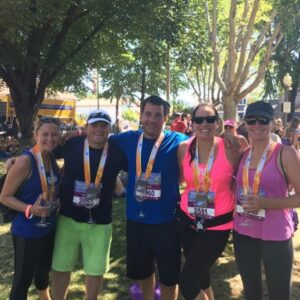 After lots of hugs, high fives and smiles, we were off to the tasting area! We spent that afternoon in Sonoma and the whole next day in Napa doing wine tours and tastings, and shipped home lots of great bottles. We even joined a wine club.

Recommendation: If you ever go to Napa, make a reservation in advance to go to Fleury. You won’t regret it.

Overall, it was an experience I won’t forget, and we are already making plans for next year (maybe just the 5K next year).