Let it be known, my husband was right! I’m so glad he insisted we make the trip “over the rainbow” back to Kansas for the celebration of K-State’s 50 seasons of women’s basketball and the KSU/KU women’s game. Prior to the game we had lunch in Aggieville with my much-loved former boss and mentor, Larry Strecker, and his wife Eleanor. 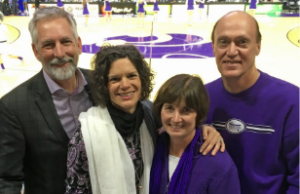 We hadn’t seen him in years – maybe a decade! I was one of over 70 other former women’s basketball players who returned for the two-day reunion.

The following excerpts from an article in the Manhattan Mercury describes some of the history of the program:

“1968 was a turning point for the country. Civil rights issues, demonstrations, voting-rights legislation, a widening generation gap and the Vietnam war provided multiple avenues for unrest among the citizens. But at that time, a much quieter revolution was taking place in college athletics on campuses across the country. Kansas State University was among the leaders of this movement, as was the University of Kansas. The participants of the revolution didn’t realize the impact their efforts would have for many years.

While student unrest made the front pages daily, women basketball players at K-State sought practice space, made up game schedules, created uniforms, and sacrificed time and energy to be able to play basketball at the collegiate level. The fledgling movement went on to become, by the early 1970s, a nationally recognized women’s basketball program. Over the ensuing years, K-State women’s basketball set records galore. It had 200 wins in the first 10 years of the program. There are currently three Kodak All-Americans. There have been 31 postseason appearances — including an Elite Eight appearance in 1981-82, and the program reached 900 wins as of one year ago.

So what is the same after 50 years of women’s basketball at K-State? Leadership empowerment through the venue of athletics has not changed since 1968. Learning to be a team member, to contribute to the team, and to be willing to listen remain unchanged no matter the playing years. Adapting to conflicting scenari 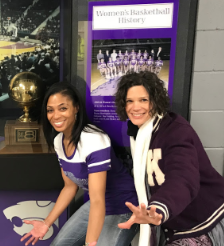 os and the opportunity to support an idea one is passionate about remain in 2018.”

Traveling back to this place and time filled me with HUGE gratitude that I was able to take part in this amazing program during the 80s. It was indescribably fun to reconnect with dear ones with whom I’d lost touch. We gathered into the wee hours and remembered our years of shared “agony and the ecstasy.” Forgotten moments flew back as if they’d happened last week: made shots and missed curfews, championship rings and torn hamstrings. We FaceTimed teammates that weren’t able to make the trip and lifted a glass to them.

Eventually, we shared more recent pains of the parents, spouses or children we’ve lost. And we marveled at the marvelous joys that had unfolded in our spheres of influences since college. We howled with laughter until our voices became hoarse. And we went away filled with gratitude at the realization that, while our bodies have lost their hard-fought tone and training, our souls have gone on to thrive, drawing upon those character-forming years struggling and triumphing together as Lady Cats.