Things went wrong from the start. Ross, my adventure partner, had arrived the night before at the Denver International Airport where I had the pleasure of informing him about the first setback of the trip. My plan was to have our equipment rented before he got in, driving out early in the morning the following day and giving us plenty of time to trek to our first hut. When I went to pick up the skis, I was informed we could not rent them until everyone in the party was able to sign a waiver, meaning we would not be able to obtain Ross’s skis until they opened the next day – setting us back at least five hours. After talking it through, we decided this was no problem because we were in shape and only had three miles to ski to our first destination after all. Ross and I caught up about home in California, then it was time to get some rest before our departure the next day. 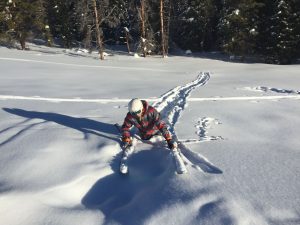 We slept in, then made quick work of checking we had all the pertinent gear. We booked it to the rental store and picked up the skis. By the time we had gotten on the i70, it was 11:15 am, putting our ever later ETA at 2:45 pm. Moving as quickly as we could, our arrival at the exit ramp of the freeway headed into the mountains was welcomed. That was until we hit our second setback of the trip: Turns out, the road was closed due to heavy snow that winter leaving us no choice but to pivot and start moving towards another trailhead that was further north. Not only did we have to backtrack down a very windy and icy road, but we had to travel another hour down the freeway. Feeling nervous about the daylight expiring before our eyes, we decided to do the best we could given the current time. Besides, if we had to ski out to the cabin under nightfall, that would be alright with us. 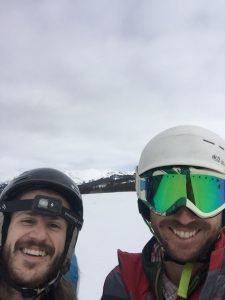 Finding the trailhead was tricky. It was a very narrow offshoot from the already icy road. Camouflaged by the surrounding snow which took even more time away from the ever-dwindling light. By the time that we finally arrived at the trailhead, it was nearing 7 pm, with the sun solidly behind the mountains and night descending quickly. We briefly laid out our options about what we could do: Either 1) Go for it and hopefully make it to the cabin by 10 pm; or 2) Camp out in the car overnight and start first thing in the morning. High on anticipation and fortified by stubbornness, we concluded that we were up for the challenge, and we were going for it.

While we were changing into our snow gear, Ross mentioned that his feet were very numb. As we drew closer to departure, his mood had pivoted to something more frantic, growing increasingly alarmed about the state of his feet. I decided to make the call delaying our departure just a little while longer. We hung out in the car with the heat on our feet, chuckling about how bad of an idea this was. We situated our packs and headed out on the trail. Then, only 30 feet from the car, my binding on my ski became undone and I fell over in the dense powdery snow. I had a moment of doubt, realizing just how challenging emerging from the grips of powder with a 60-pound backpack on is, especially as I had little experience skiing.  However, all things considered, we were still there, feeling motivated and genuinely happy to be out in nature.

The first hour went pretty smoothly, but there were a few instances where Ross toppled over while getting used to the skis. After topping the first hill section, we were already feeling pretty beat and out of breath. Around us was nothing but the abyss, having our only illumination of the surroundings emitting out of our headlamps and directly down onto the narrow ski trail. The trail was carved out from previous travels, which inspired a feeling of envy, reminding us of others touring at a more desirable time of day. All normal woodland sounds were absent, replaced with a dampened muteness, eerie and unwelcoming. While wandering down the trail, we noticed our most serious setback: Most of our water had already frozen. We quickly realized the large bladder that Ross was carrying could be arranged close to his back to prevent freezing, so we arranged it as such and kept moving. 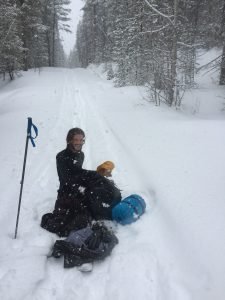 After the second hour, we decided to take a look at the map and determine how far we had gone. It was around 9:30 pm, and we had gone a total of three of the eight miles we needed to complete our mission. We had arrived at a part of the trail called the flats. We welcomed the idea of flat ground, but we soon came to understand that was not entirely the case. It was two miles of slight uphill, where the previous ski tracks were less visible. Our only indication that we were on the trail were markers placed around eight feet high on a series of trees and each Marker was around forty feet apart from the next. There were moments when we could not find the next marker, and I had to remind myself it was important not to panic because that would be wasted energy which would be needed later. Luckily, we navigated the rest of the flats and found ourselves on a snow-covered service road called Mt. Burnt Road. We decided to take a long rest here, realizing that we hadn’t had any real dinner, and while not moving discovered we were quite hungry. Ross made it clear throughout the venture that his hip flexor was bugging him which was causing a sizable amount of pain.

Sitting in the snow with our jackets fully unzipped, my feet burning from being stuffed into poorly fitted boots, looking up into the sky and so far from any structured civilization, I felt a surreal feeling building. It’s funny how your mind can begin to wander while there are no distractions around. I found myself recalling the moments I had planning for this trip. Then discovering emotions related to how worried my girlfriend would be if she knew we were not even halfway there at 11 pm, then drifting into a strange realm of memories, not relevant to my current situation.

I was brought back to the present with a sharp sensation of feeling hopeless, hungry, and exasperated. I began to consider the possibility of heading back down the mountain and sleeping in the car. I remember that the air was exceedingly dry, the temperature was well below freezing, and the snow felt almost like sand. Even resting against my skin, it was showing no signs of melting and held clear structures of snowflakes as if it had been unchanged since its formation. I quickly remembered that I had cheese and sausage accessible in a top pocket of my jacket. I grabbed my knife and cut a few slices off and shared them with Ross. Breathing so heavily in the dry air made it uncomfortable to swallow, and I had almost no sensation of taste. 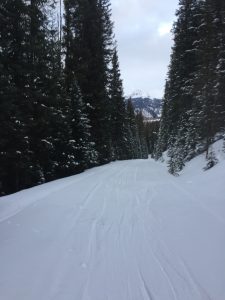 We began up the steepest road I had ever encountered, having to take breaks almost every 200 feet, hating my backpack and how old and unstructured the weight-bearing skeleton was. The road was at the perfect angle where our skis would not allow us to slide at all with our skins on. After about another hour, I had decided to check the map to orient where we were with the compass. I was met with a common and familiar companion at that point, disappointment. We had only gone a little more than a mile. The thought kept creeping up: what if we just turned around? It would have been all downhill the whole way back, then we could experience the sweet embrace of slumber in the car. I mentioned the idea to Ross, and he toyed with the thought for a moment only to eventually shoot it down. We had arrived over halfway, and the map showed that there was a pretty significant downhill for most the way to the cabin. I agreed, and we continued up the mountain in the dark, feeling a burn in my esophagus from the sausage, and certainly, in a bad mood. Within thirty minutes, we had arrived to the most welcomed sight – the road appeared to start slanting downward.

I had no hesitation to start gaining speed and moving quickly down the slope. After descending downward for around 20 minutes, I turned behind me and quickly became alarmed. There was no sight of Ross, or his headlamp illuminating any of the surrounding area. I had a moment of concern for Ross, as he was not the strongest skier, followed by a deep sensation of isolation. The scenery was muted and unwelcoming, and I felt swallowed by nature. I snapped out of this trance shortly after Ross rounded the nearest corner where I could hear his breathing. After we had reconvened, he urged me not to get too far ahead. I agreed to his terms, and we continued down the slopes to hopefully arrive at our last incline before the cabin. After a fast mile of slight downhill, a buzzing appeared from above, sounding like white noise, as if someone had left the television on full blast on a dead channel. Looking up, we quickly deduced that the emission of the sound was from live power lines being struck by snow, which was then being superheated by the electricity traveling through the lines (or which we believed was the causation). What better time to check the map while under power lines, and experience the most surreal sound? 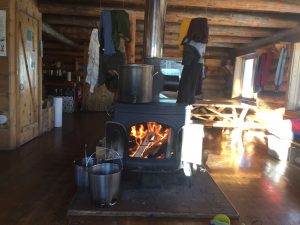 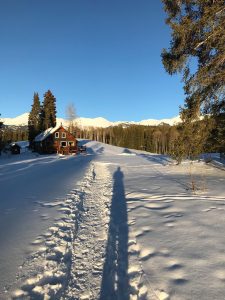 Only half a mile was remaining between us and the ever so welcomed escape from the elements. Making our way to the bottom of the slope, there was a steep incline, which was our final challenge. The ski trail was off of the road we had been reliant on, which made us nervous about the chances of being off trail. Ross led while we began our summit. There was a moment halfway up when Ross had fallen over into the thick snow. We laughed about it, both agreeing that it was just the theme of the trip – to have everything go wrong. At the top of the hill, we could see a very faint glow just past a field, which was a welcomed sign of relief and rest.

I quickly shredded my way toward the cabin where I could see people walking around the structure. This was strange given that it was 2 am and in the middle of nowhere, but my energy was too depleted to care. The people that I saw walking around the cabin had retreated inside by the time I had reached the wooden steps. I threw my skies down in the snow and sat there at the fourth step waiting for Ross to arrive. Once Ross had turned up, we shared a brief hug and muttered something like “I cannot believe we made it”. We topped the stairs and entered the cabin, which would be our home for the next 3 nights.