Understanding the “why” of human behavior is a complicated tangle of influences similar to that of a spiderweb. If one thread of the web is pulled, the effect on numerous other threads may not seem related at first. Psychologists have a unique perspective having done a great deal of study and research to understand these things. However, being a psychologist is much like being a meteorologist in this regard, because while they may be able to see what is happening and predict the different directions a person may take, it may be nearly impossible to influence what happens.

One of the key things to understanding complex and intersecting concepts like these is that very little in the world exists as a dichotomy, or where there are only two distinct categories. In reality, there are nearly no strict black and white concepts in the world of psychology, which is why some personality models that try to put everyone into clean boxes like “introvert” or “extravert” have little validity and don’t prove to work well in practice. That’s because almost everything in the world exists more appropriately on a continuum with a normal curve, where almost all people are in the middle of that curve, meaning that in the introvert/extravert example, around 95% of people have some traits associated with introversion and some with extraversion. Most people might have a slight preference for being around other people or being more solitary, but very few at the ends of the distribution are people who absolutely love being around large groups of people or being almost entirely solitary. Thus, trying to put people into one of those two boxes becomes very difficult, and only about five percent of the population are very easily identifiable as strict introverts or extraverts. 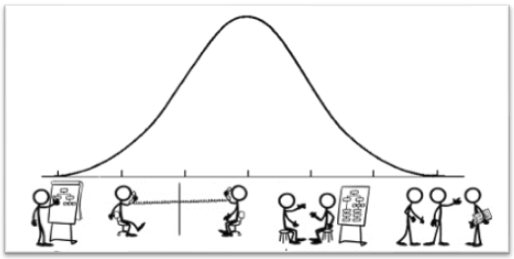 Additionally, personality is what psychologists call a “relatively stable construct,” which means who someone is at their core generally crystallizes in an individual’s mid-twenties and doesn’t change drastically without very influential events. For example, someone who is more closely associated with having extraversion traits won’t shift considerably further to being more associated with having introversion traits without some extreme circumstance taking place. Those extreme circumstances can be things like divorce, a complex breach of trust, the unexpected death of someone close, etc. Thus, for most people, their core personality is in place at 25, and it generally doesn’t change much.

Then, how do people who may not have a lot of extraversion engage in public speaking? Or how does someone who’s generally a messy, disorganized person keep a workspace clean and organized? The key to this is an understanding of how personality and behavior are connected. Specifically, personality is one of the prime unconscious influencers of human behavior, and personality “unconsciously” influences behavior. If it were possible to remove conscious thoughts, people would behave pretty much as their personality drives them. People who prefer disorganization would behave in messy, disorganized ways, and people with preferences for introversion would likely spend most of their time avoiding people and engaging in self-reflection. But, individuals have the ability to control their personality’s influence over them with their conscious thoughts, which can be trained. Even if people prefer introversion, they can learn to act in ways that extraverts do, and can do so by making conscious decisions to act in that manner. Messy people can learn to act in organized ways. But even though they’ve learned to act in a certain way, much like an actor playing a role, their core personality doesn’t change. In fact, when they’re tired and not paying attention, they’re likely to return to letting personality drive their behavior, even if they’d prefer not to.

Another thing that can influence behavior is mood, and moods are what psychologists call “less stable, state-dependent constructs.” This means moods can change drastically from day to day and are dependent on what’s going on around us, more than in our own minds. In addition, it is important to note that people are also influenced by what is going on around them based on their personalities. If a person tends more towards embracing anger (assertive extraversion) versus a person who tends more towards recoiling from those types of stimuli (passive introversion), each will react differently towards things that happen in their environment. That is why some people react to adversity with a mood of anger and others react with sadness and reclusion. In addition, people generally have a set point of their moods that they will return to over time after they’ve been pushed one way or the other by uncontrollable influences in their environment. Different people take varying amounts of time to return to those set points of moods based on their own personality and the extremity of the situation, but everyone will always return to a set point.

Every person has this spider web made of 1) very stable, unconscious personality traits; 2) fluid, rapidly changing moods that are influenced by their environment; and 3) conscious thoughts that can influence how their behaviors are expressed to everyone around them (unless they’re really tired or deeply in thought). It can all seem very confusing, but if how the strands of the web are connected and influenced can be understood, then people’s behavior can be more deeply understood. When a person needs to move into a new career that involves making some pretty radical changes to their behavior, it may be necessary to explore where their behavior comes from. Is it a core piece of their personality or some consciously learned behavior that can be influenced? If a person who is normally a happy, organized social butterfly suddenly turns inward, quiet and scattered, there is likely some external environmental influence on their behavior that could be changed, bringing them back to their normal set point of normalcy. So, communication and conversation can go a long way to understanding what needs to be changed.

If we take steps to understand the web of personality, mood and behaviors of those around us, we move into a new way of better connecting to the people in our lives. And in the end, as humans, we thrive on connection. So, learning to be better friends, coworkers and citizens can only help us seek deeper, more meaningful connections in all aspects of our lives.