Every October, my wife Tara and I run off to New York City to be a part of a pretty big bit of nerd culture, called New York Comic Con, or NYCC as the nerds call it. We stay for the whole convention from Thursday until Sunday. But, it’s not until Sunday that we’re able to actually be attendees. Up until that point, we’re both wearing all black. As you can see, I love to wear som 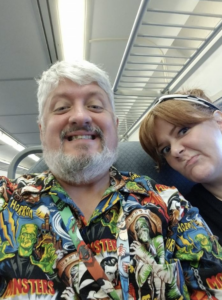 e color on Sunday, and from what I’m told, Tara just absolutely loves this shirt. You can see it in her face.

So, why do we wear all black for most of the convention, you ask? It’s because a friend has a business that does talent handling behind the scenes and we work for her. Out in the front of the house where most of the attendees are, there are throngs of people in colorful costumes at the massive Javits convention center overlooking the Hudson River Attendees are there to meet everyone they’ve seen in Sci-Fi/Fantasy movies and maybe get a quick conversation as one of the stars autograph a picture. We wear all black so we blend into the background as we’re working. In other words, the moment the movie and TV stars arrive at the Javits center, we get assigned to them to make sure they safely and promptly get to and from all of the places they need to go for autographing sessions, interviews and panels.

I still have some trouble navigating the front of the convention center out where huge crowds of attendees move from place to place, but we know all of the back pathways in that giant building so well that getting to a place through a set of back corridors and stairwells is intuitive. We can get a group of people from one place to another even if an elevator goes out by sneaking through pathways that no one out in front knows about. We also know the most valued of all knowledge: where the nearest non-public bathrooms are no matter where we are in the building.  We’re a combination of a knowledgeable guide, first-line security and critical problem-solver. We know all of the back ways through the building so if an elevator is out or if there’s a security problem, we can immediately figure out the best ways to another place while working with the security guards that each of the stars might have with them. We have to do all of that while conditions change rapidly, the scheduling is down to minutes, and without upsetting the people we’re handling by using soft forms of persuasion and motivation.

And that brings us to the stars! We do meet a lot of them. I had no idea I’d be standing next to this guy. He was so much more wooden in person. 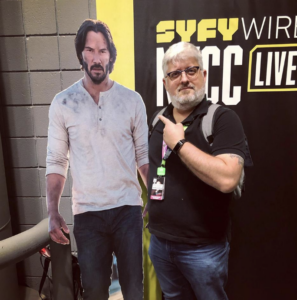 Seriously, we do meet a lot of stars, and that means that another part of the job is being able to do everything I talked about before without getting starstruck and being as invisible or visible as they’d like you to be. Some stars truly just want you to help them get from place to place. Others want to chat you up the whole time and really get to know you. When that happens, it’s always amusing how actors react to me answering the question of  “what do you do when you’re not here,” by telling them that I’m a psychologist. It also means that much of the time, you don’t put specifics in print about those conversations. You might be standing next to one older actor while they’re having a mentoring conversation with a younger actor helping them figure out which picture deal to take. You might hear a complaint about a hotel or a cab driver. And you’re trusted to not tell anyone what you’ve heard because you’re trusted to make their work at the convention be as positive of an experience as possible. 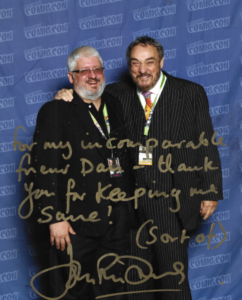 And, sometimes you get to know them really well. A few years ago, I worked with this young man for the entire three days. He found out that I was a psychologist and proceeded to playfully tease me all three days that it was a pity I’d not taken the leap into studying an actual science into something with all the credibility of astrology, and then the jabs went back and forth. He “kidnapped” my wife when I wasn’t looking and interrogated her for any information he could use against me later.

“Do tell me, my lovely woman. I need to know everything there is to know about Dan. It is critical to my understanding of how the man ticks.”

When he takes selfies with you, he tickles you in the ribs to get the best smiles by making you laugh. And, yes, he really does have that booming voice that you’ve heard when he played Gimli in The Lord of the Rings and Sallah in Raiders of the Lost Ark.

At the NYCC last October, I took 73,359 steps, walked 32.59 miles and climbed 48 flights of steps in 4 days. So, every single time I’m done with the convention, I’m exhausted from the work, but it’s always worth it. It’s challenging, and it gets me out of the same groove I’m in with my day job. It forces me to solve multiple problems in a very short time. And I end up with so many stories – some of which I can only tell over a drink, like the joke that I turned back on Mr. Davies causing him to burst into laughter that I’d only ever hear on a movie screen in a theater.